1.Global description of the technological area

Visualization is a tool used to explore complex (or even simple) data across a large number of domains. Immersive visualization is characterized by the use of virtual reality and its interaction with data, relevant aspects for scientific evaluation and also in fields such as training and education. This visualization allows active interaction with possible representations, for example, in drug design “you can walk through brains or molecules, and you can fly trough galaxies”.

The requirements and level of interaction vary depending on whether this “walk” is for professional use, for students or for the general public. Data immersion could take place by the user or in a shared environment, where it is explored and evaluated with others.

The data can be static, or it could be immersed in dynamic processes, in addition the data must be visible in multiscale form. Three-dimensional representation of real or modelled data is important for understanding the data and for decision making after this understanding, a relevant topic to several fields, especially in those datasets that are growing exponentially.

Even when most analysis tools are computer-generated algorithms, human vision highly sensitive to patterns, trends and anomalies.

One can think of virtual reality as a specific means to achieve effective visualizations. Virtual reality has a number of features that can contribute to the success of a visualization application, especially when that application must address with high-dimensional data, large volumes of data and/or highly complex data.

One of the great strengths of virtual reality is its stated goal of offering users more accessible, more intuitive and more powerful interaction capabilities. One way to understand this concept is to imagine that a user receives a foreign object that can be held in one hand.

What is the natural thing for the user to do? First, the user will rotate the object to examine it, just as virtual reality can be used to provide users with different views of an object or scene. Then, the user can the click on the object to determine some of its properties or to trigger a behavior, just as one can use virtual reality to provide users with gestural interfaces for direct interaction with virtual objects.

USE CASES AND APPLICATIONS

Below are several cases of using Virtual Reality for data visualization.

Virtual reality is a useful tool for visualizing numerical and observational cosmology data. These applications support multiscale visualization of large, multi-level, time-dependent datasets using an immersive display and a gesture interface that facilitates direct interaction with the data

Virtual reality has been used to develop applications for peer-to-peer comparison between sets of groups generated form different gene expression datasets. They show the distribution of overlaps between two sets of hierarchical groups, based on hepatocellular carcinomas and hepatoblastomas.

Meteorologists often use 2D graphics or text to display their data. Such an approach makes it difficult to visualize the 3D atmosphere. Several projects have addressed the problem of comparing and correlating multiple layers by using an immersive virtual environment for true 3D visualization of data.

These applications provide researchers with the ability to interactively alter ocean parameters and communicate those changes to an ocean model that calculates the solution.

The protein structures are large and complex. Large format virtual reality systems support the visualization of such data and also the collaboration of small teams that analyse the data.

Many computer programs exceed a million lines of code. The ability to really understand programs of such magnitude is rare. Visualization of such systems provide a means of understanding the system and extending or modifying it collaboratively.

Several projects have developed virtual reality-based applications for the analysis of high dimensional statistical data. In addition, the virtual reality approach is proving to be superior than the desktop approach in terms of structural detection tasks.

Real-time visualization of particle traces using virtual environments can assist in the exploration and analysis of complex 3D vector fields.

The use of increasingly complex simulations of finite element (FE) vehicles during crashes has led to the use of virtual reality techniques to visualize calculation results. These applications receive geometry and physical property data as input and provide the means for the user to enter a virtual crash and interact with any part of the vehicle to better understand the implications of the simulation.

One of the first successful demonstrations of virtual reality as a visualization tool was the development of the virtual wind tunnel at the NASA/ Ames Research Center. Given the high cost of maintaining and operating wind tunnels and the limited regimes (both wind speed and size of the wind surface), the virtual wind tunnel offers significant potential to reduce the cost and expand the availability of wind tunnel experiments.

In recent years, virtual reality has had a growing impact on the exploration and production of hydrocarbons, specifically oil and gas. In 1997, there were only two large-scale visualization centres in the oil and gas industry. In 2000, the number had increased to over 20. More importantly, these systems have had a demonstrable return on investment in terms of improved speed and successful decision making for exploration and production activities. 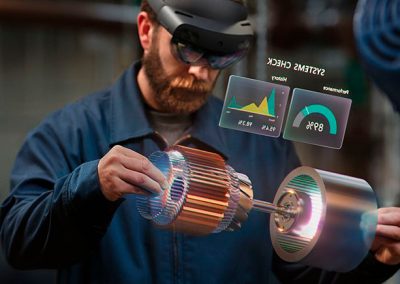 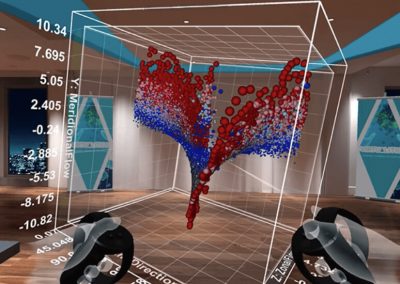 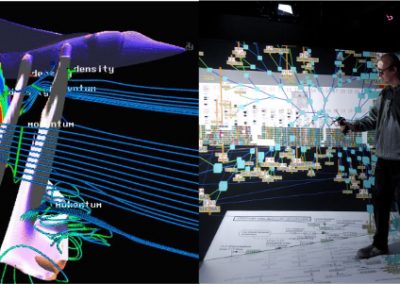 DO YOU NEED SOME OF THESE TECHNOLOGIES IN YOUR PROJECT?

Get in touch with us through the form for companies and we will guide you to incorporate these technologies into your project through the partners specialized in your activity.

GO TO THE COMPANY FORM

Gestionar el Consentimiento de las Cookies
We use cookies to analyze your browsing habits and show you content of your interest, collect statistics on the use of the website, identify faults and, ultimately, provide you with the best possible user experience. For more information, visit the
Manage options Manage services Manage vendors Read more about these purposes
Preferences
{title} {title} {title}